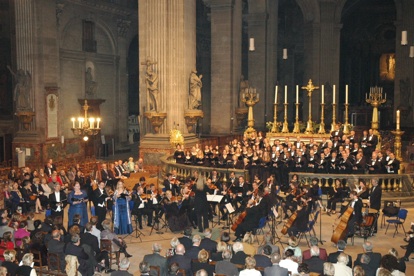 It’s hard to believe that the premiere of my Requiem happened over 6 months ago. The whole experience seems surreal in retrospect. There was so much to take care of before going over that while I was there, I was hardly even aware of what was happening while it was happening. Then in the blink of an eye it was over, and my life somehow changed forever. Something was complete. I had come full circle.

It was the end of a 12 year cycle. I had written the first notes of the 5th movement, Pie Jesu, on April 22nd, 1999. April 29th, 2011 was the premiere in Paris, 12 years and a week more or less after jotting down the first notes, thinking to myself, “That’s nice, pretty melody, but probably nothing will come of it.” My inner dialogue is pretty frightening, truth be told. At the time though, it is what I thought on a certain level. I never had trouble coming up with ideas for pieces. My notebooks are full of 8- 16 measure starts, but no finishes. I always had a beginning, sometimes even a middle, but hardly ever an end. So to actually get to the end of a piece was a real breakthrough. It would be another 10 years before I would see the 9 movement work to its conclusion. To think I wrote another 10 movement choral work on the heels of the Requiem in an insane 6 months gives me a bit of a front row seat on myself. I remember watching an interview of Karl Lagerfeld on French television one night with Gwenole. Lagerfeld said, “La créativité, il faut la forcer. Cela ne vient pas forcément tout seul.” So he believed that his creations didn’t just happen, didn’t just come by themselves, he had to force himself to create new designs, etc. I was very passive about creating the Requiem. I couldn’t be passive about creating Cantata Emmanuel because there was no time to be passive! I had 10 movements to write and orchestrate for a concert on  Nov. 22nd, 2009. End of story. It had to come together, and it did, and as always, just in the nick of time. I like to joke that “the toner on the orchestra parts was drying as I was driving down the highway to the first orchestral read-through.” Hommage à Mozart and the overture to the Marriage of Figaro. I could write the Cantata so quickly because I already had the experience of writing and completing the Requiem.

Pieces don’t just come together. We work on them and they come together. Staring at the blank page or the empty computer screen, the more modern equivalent, can be a very disheartening and depressing experience until that moment when for some odd reason the page starts to fill up. It’s about turning off the thinker, and turning on the doer, and accepting what ends up on the page.